At the time, Tara Caffelle was working on getting her first book published and need a publicity campaign in place to get as much as exposure prior to the book’s release. She also worked with a wide variety of clients, from couples and new parents to those grieving the loss of a parent or spouse. The challenge of this press campaign was two-fold: not only did I have to build a fairly extensive media database of lifestyle publications/blogs, podcasts and mainstream outlets with a lifestyle component, I had to develop several different story angles and make sure that they were pitched to the proper media. I also had to make sure that the outlets I pitched were in line with how Tara conducted business with her clients (whom she met with in person, by phone and Skype), which meant I couldn’t pitch media too far outside her referral network.

Focusing on developing several different story angles for different publications, I created pitches that focused on the importance of mental health (in time for Canadian Mental Health Awareness Month), on how to cope with grief and how to navigate communication issues in relationships, among many others. Several of these ideas were tailored to publications such as Best Health Magazine, Cosmopolitan and PopSugar and submitted as interview ideas-which gave each outlet options for interviews.

Thanks to the variety of pitch ideas sent to national and international newspapers, blogs, magazines, podcasts, radio and broadcast programs, interviews and guest article opportunities were secured in outlets including but not limited to: PopSugar, Best Health Magazine, Cosmopolitan, With Her In Mind, She Does the City, The Good Grief on Voice America and BITE (Bringing Inspiration to Earth) Radio. 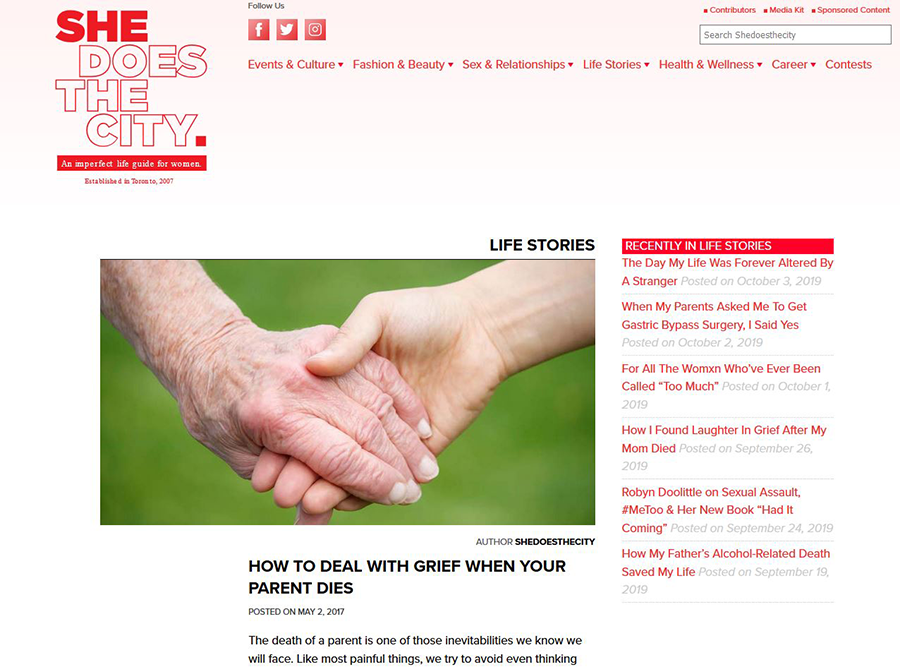 April 27th, 2017-Interview w/ Tiffy Thompson for She Does The City on how to help support a grieving loved one 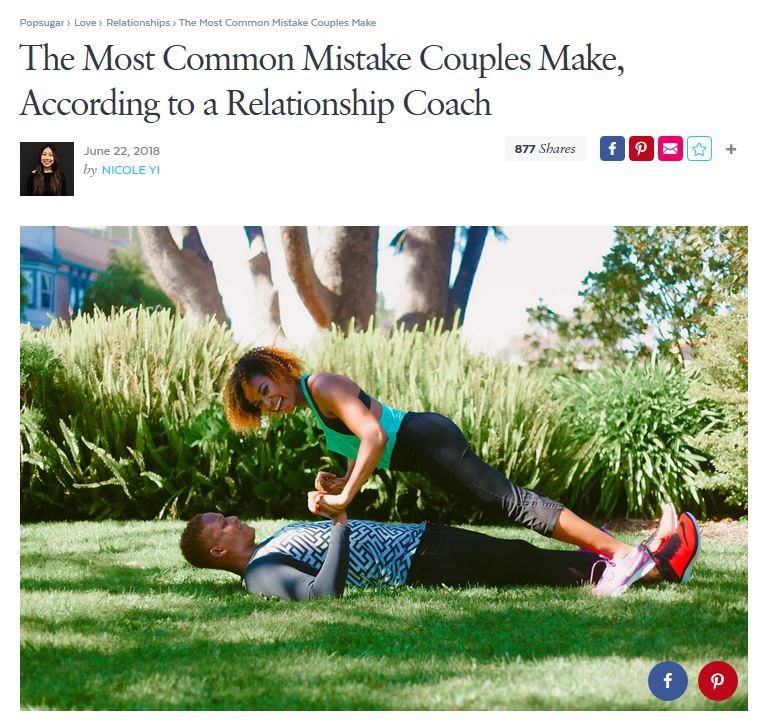 June 16th, 2017-What Makes a Relationship Last for PopSugar 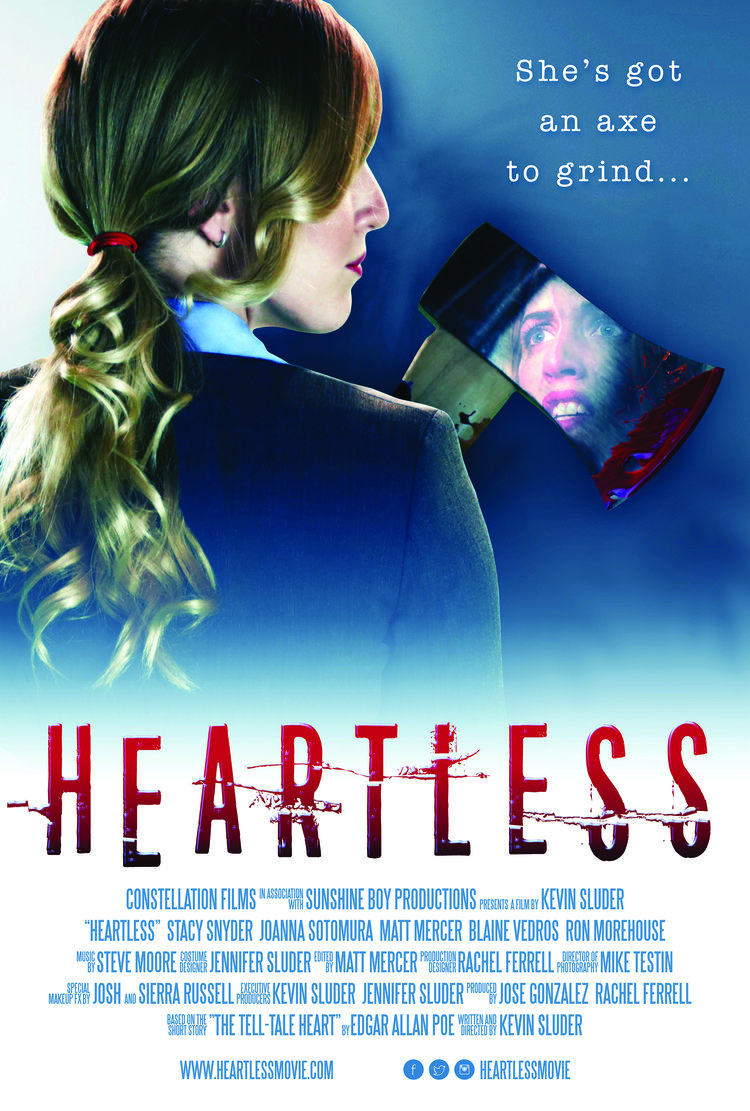 As a unit publicist with experience running public relations campaigns for short films, this film presented challenges I hadn’t previously dealt with in my other projects. For my other short films, I’d had the benefit of support through the film event I was working on (see my Crazy 8s case study) or it was a one-off event such as the TIFF strategy for Peter Dacunha or helping Black Land through the Cinecoup competition. Heartless is my first American-directed and produced short horror film where I didn’t have a film event, competition or team behind me as a jumping off point and a sense of urgency to make the publicity campaign flow easier. Heartless, and by extension, the film’s award-winning production company, Sunshine Boy Productions, also has the distinction of being the first film I’d actively pursued for publicity. An unintended benefit of this being my first major solo unit publicity campaign, however, was the ease in obtaining film reviews where it had previously been difficult for my other film projects. Not only did the fact that Heartless is a horror film make it much easier to obtain reviews, Kevin & Jennifer Sluder, the film’s director & executive producer (and owners of Sunshine Boy Productions) have also been readily available for interviews as the production company is their primary business.

Focusing on local media (newspapers, magazines, blogs), indie film podcasts, blogs and horror review outlets, I updated my media database based on the regions the film was screening in, on the festival circuit. As a result, I was able to pitch Heartless to countless local media in regions such as Lansing, MI, Durham, NC, Calgary, Alberta and the greater Los Angeles area. In addition, I was also able to pitch interviews and reviews for Heartless with numerous horror and indie film media outlets worldwide such as Ready, Steady, Cut out of the UK, Rue Morgue Magazine out of Toronto, Canada, Promote Horror out of the US, Dave Bullis’s Indie Film podcast out of the US and Popcorn Horror out of Scotland. 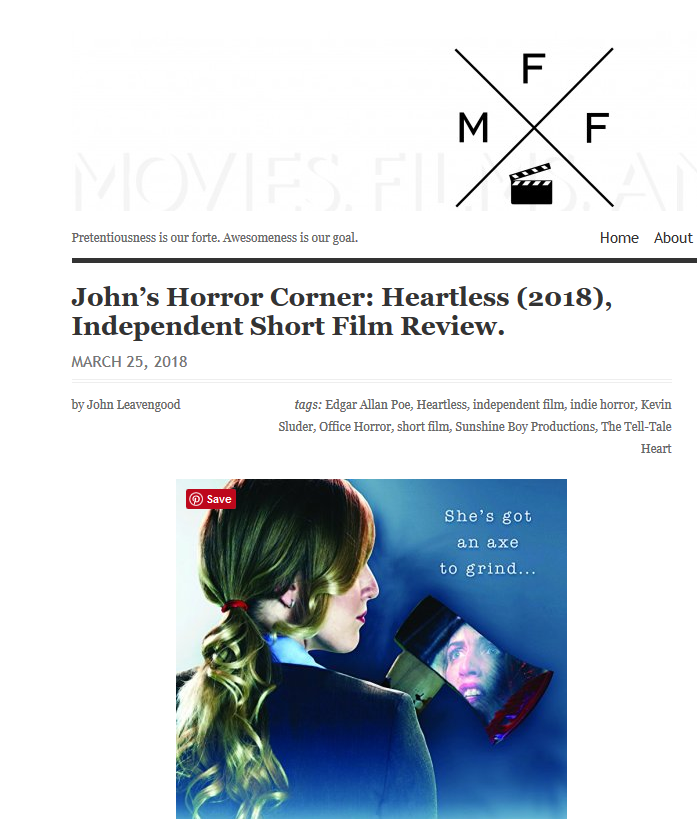 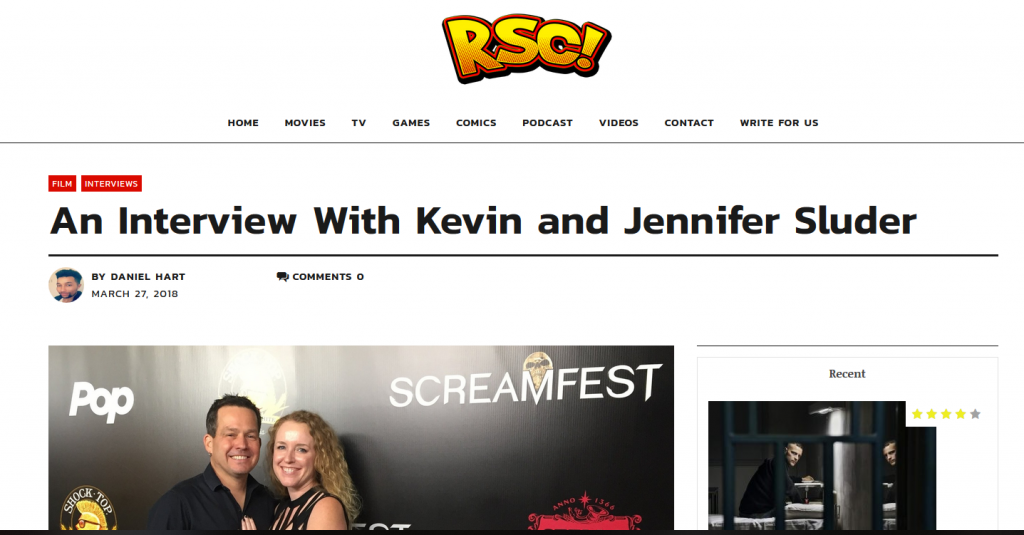 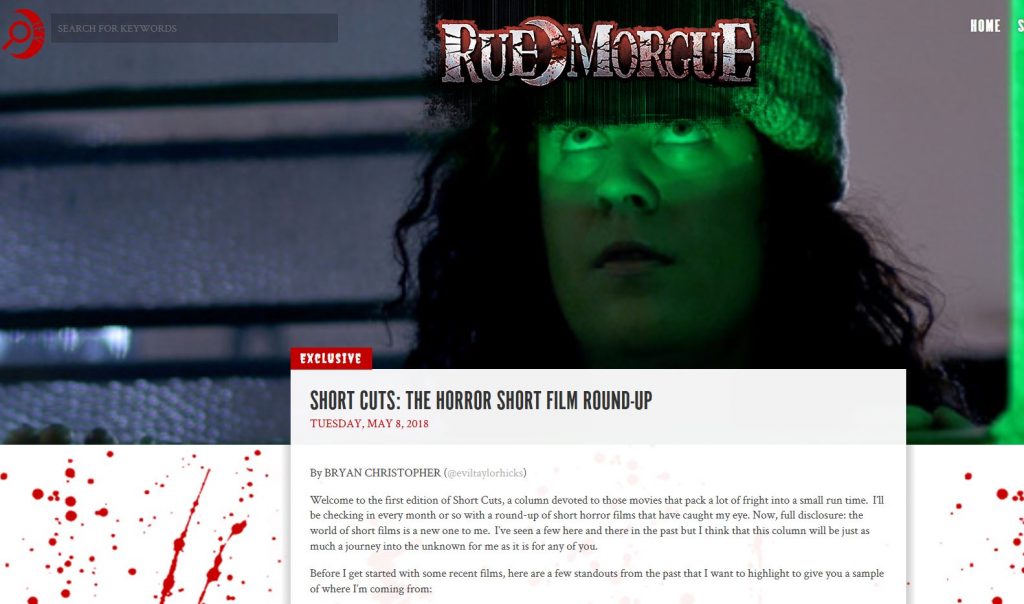 July 26th, 2018-Interview with The Fear Merchant on The Bazaar Cast

As the unit publicist for APTN’s third season of the Indigenous cooking series, Moosemeat & Marmalade, this production stood out from my other indie film projects for a few reasons. 1) It would be my first time doing publicity for a TV series, 2) It would also be my first time promoting Indigenous food culture and 3) As a recurring client of The Social Agency, they’d already established press coverage from numerous outlets across Canada for the past two seasons that saw the show increase in popularity. So as the new publicist coming into the project, I had both the added benefit & challenge of pitching Canadian media coast to coast as well as trying to establish new story angles for a series that had already covered a lot of ground over two seasons. The goal was to expand coverage to reach completely new audiences. There was also the media relations strategy between the outlets and the two co-hosts; Cree bush cook/Indigenous rights activist Art Napoleon and UK born Chef Dan Hayes, owner of The London Chef Cooking School, to consider.

Focusing on story angles such as the first-ever gleaned Vegetarian Chili recipe (meaning it used leftover crops after the harvest) and Indigenous food culture and sovereignty, I pitched several mainstream major city newspapers, blogs and radio stations across Canada. As the TV series also filmed in several locations on the Gulf Islands, Vancouver Island, Northwest Territories and overseas in the UK, I pitched the story angles to publications, radio stations and blogs located in these specific regions. Using the Indigenous food culture angle and Art’s passion for Indigenous food sovereignty and security, I was also able to secure interviews, coverage and recipes in Indigenous radio shows, newspapers and websites.

By pitching the Indigenous food culture & security angle along with focusing on the regions the TV series filmed in, coverage and interviews were secured in major Canadian publications such as Globe & Mail, Vancouver Sun and Sun Media network, radio such as CBC’s Unreserved & North by Northwest, industry publications such as Restobiz.ca and Food in Canada and Indigenous media such as Muskrat Magazine & CBC Yellowknife’s Trail’s End. 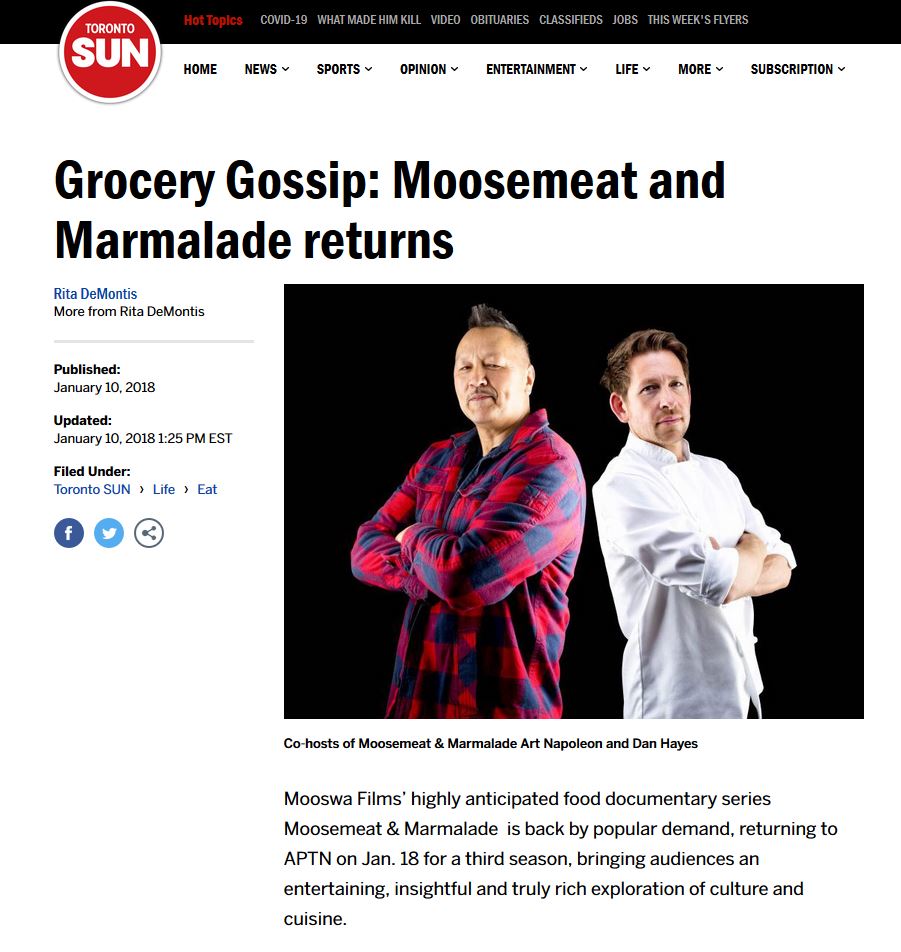 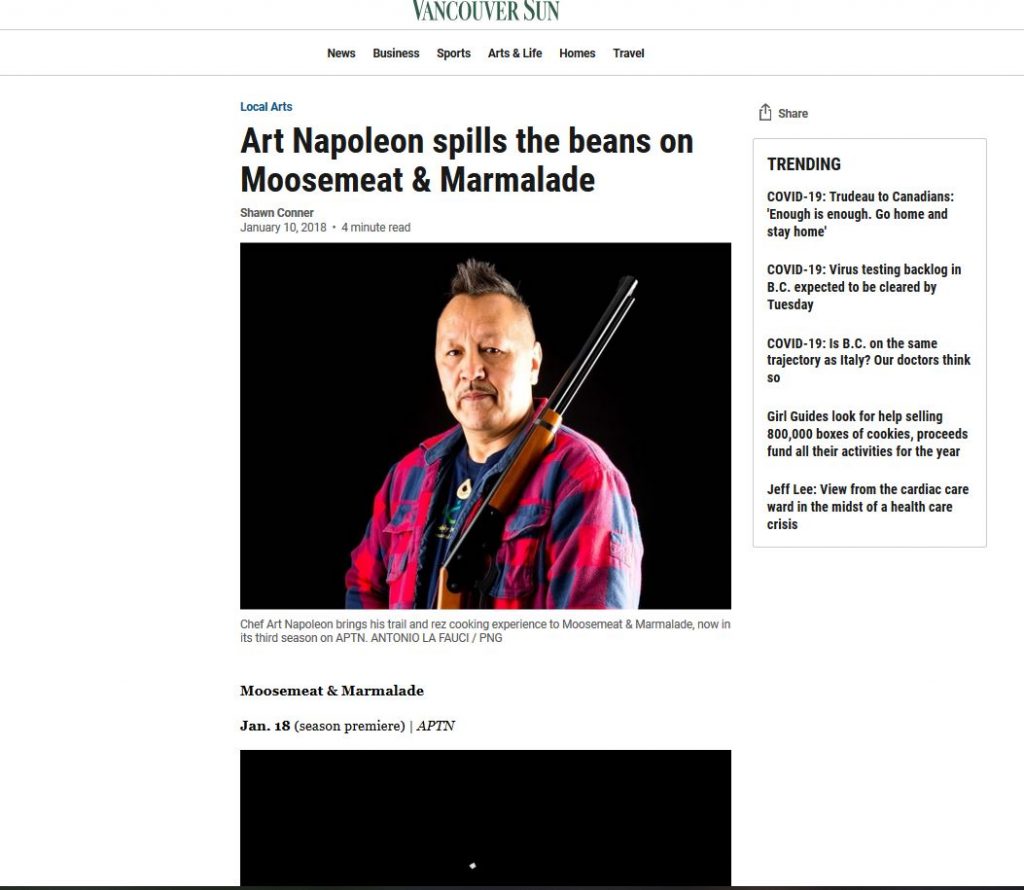 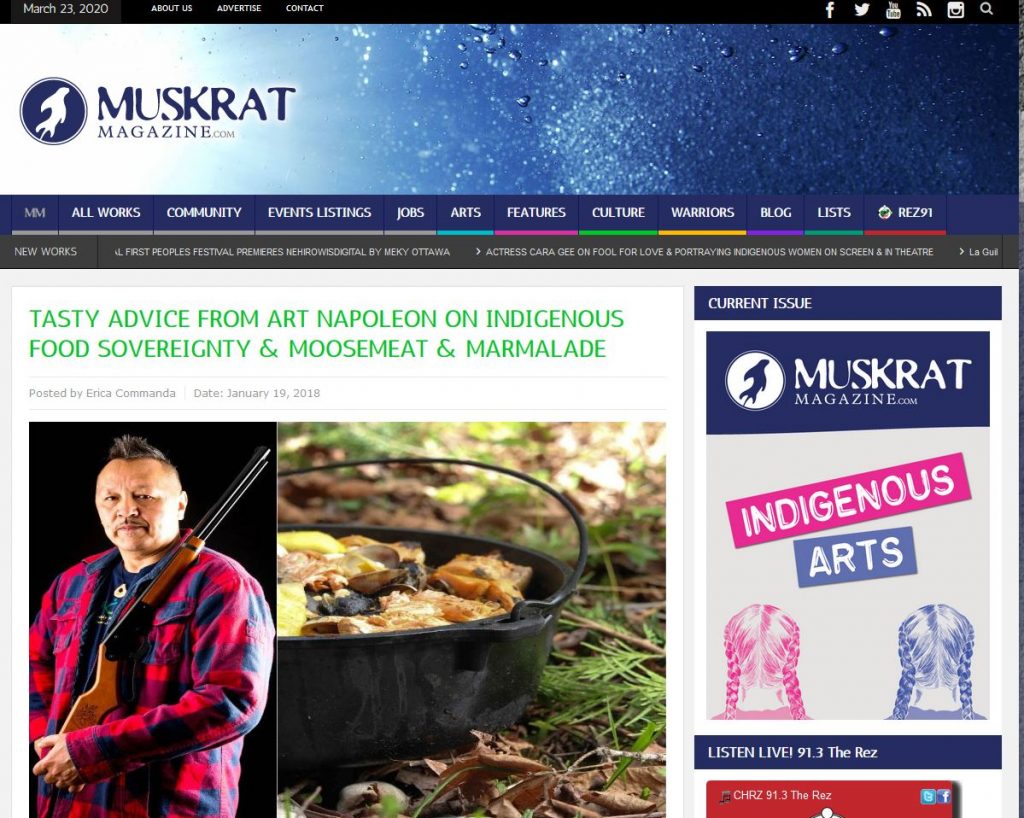 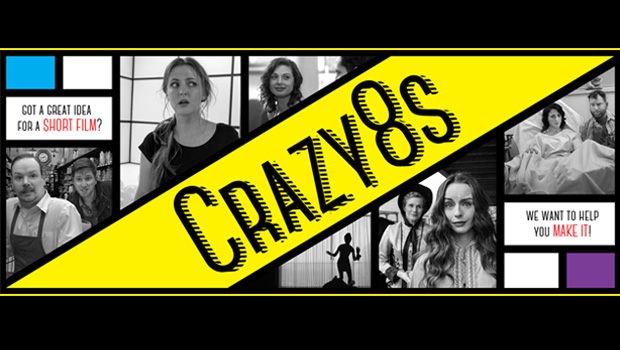 As unit publicist for the Crazy8s Film Event, developing the PR campaign for the film event as well as managing the publicity for all 6 winning teams during production, on set and during post production meant that I had educate the media that this was a film event, not a film festival. Being a film event meant that the top 6 winning teams won THE RIGHT to have their films produced and edited in 8 days with in-kind sponsorship donations in the form of cash and equipment, rather than submitting finished films to win awards. The teams were: Cypher–A coming of age hip hop story about a Korean American teenager who finds a platform to confront the pain of his past in LA’s underground hip hop scene following the 1992 riots. Anh Hung–A story of how sibling bonds are forever changed when a young girl discovers the truth of her family’s (and her older brother’s) activities outside the law. The Prince–A young dancer and her uncle, an actor, struggle with their identity as Middle Eastern Canadians following a violent confrontation on public transit. No Reservations–A satirical take on pipelines where the roles of the homeowners and the oil/gas company executives are reversed. Undertaker’s Son– A young man in a 1880s Western town is forced to confront some long buried feelings about family when he joins his father for his first day of work as a undertaker for the family business.  WoodMan-A man made of wood befriends a woman online and comes to realize how some of the lies he’s been telling himself has kept him trapped for years. Additionally, I was also responsible for working with the teams to develop the official press kits that properly reflected their experiences and positioned the proper ‘story hooks’ for each of the 6 films to mainstream and online local and international media. Developing the PR campaign was less about pitching to genre-specific media and more about doing research into each media outlet and what the types of films the journalists/bloggers/podcasters usually reviewed and scheduled interviews for.

After conducting extensive research into key media outlets and influencers and the topics they covered, I focused on pitching all 6 teams based on 3 parameters: Following these parameters, I pitched all 6 teams to select podcasts and blogs in Vancouver, New York, Toronto and Seattle along with local radio stations and newspapers. Over the course of the six weeks, I followed up with key media outlets through both email and conversations via social media and continue to pitch each film based on topics of interest. I also worked with the Vancouver Sun to set up an official production blog for all teams to blog about their experiences with Crazy8s and share their journeys from writing the scripts to location scouting and casting.

Through story pitching and social media campaign management, I secured national and international press coverage for all 6 film teams and the film event including but not limited to: radio stations such as Roundhouse Radio and Co-op Radio in Vancouver, broadcast media outlets such as CBC Vancouver, Novus TV and Vancouver TV, podcast media such as Endeavours Radio and print media outlets such as The Georgia Straight. 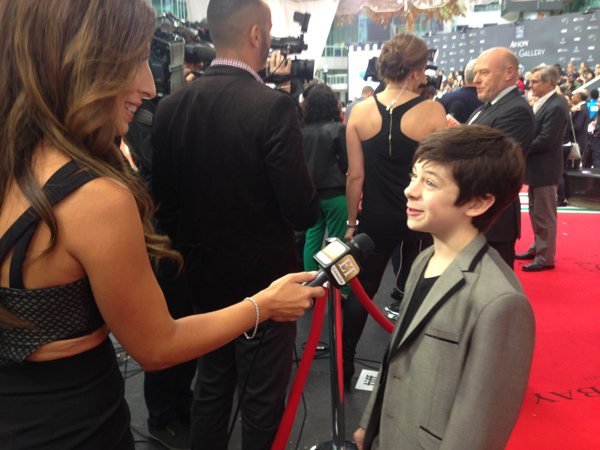 With notable feature film and television series that include for Disney, The Hallmark Channel, ABC Family, Lifetime, The Syfy Network, CBC, CBS/CTV and the CW Network, rising Canadian star Peter Dacunha has a resume that would impress most Hollywood heavyweights. But the 13 year old thespian’s career moved up another level as he worked with critically acclaimed award-winning Hollywood talent on two films, the drama Remember and horror film Hellions, premiering at the 2015 Toronto International Film Festival.

With two feature films of very different subject matter premiering at the two-week long 2015 TIFF, the PR campaign needed to be tailored to Peter’s schedule as well as their respective audiences. A limited window for press coverage and a desire to appeal to both mainstream and niche horror media meant that Peter needed more than a standard pitch to local media. He needed a press campaign that would reach the international media in the city for the festival and that would maximize the opportunity for coverage on the red carpet. I was tasked with developing a press campaign that both illustrated Peter’s depth of experience and provided unique promotion for both films he had premiering at TIFF.

In the discovery process, I interviewed Peter  learned more about his previous respective film and television roles as well as current projects and the significance of the roles he played in both Remember and Hellions. I developed two separate press campaigns, one for more mainstream local and international media and one specifically for horror media, positioning Peter as the rising star in film and television that everyone needs to know, capitalizing on his previous experience in dramatic and horror roles.

I identified a list of influential mainstream and horror media outlets and reached out to them for press coverage and interviews to help boost Peter’s visibility on the international stage and in Hollywood. The resulting national and international press coverage from outlets such as Tribute.ca, The Gate Magazine, CP24, Ginger Nuts of Horror, The Slaughtered Bird and The Avod increased Peter’s marketability as an actor on the national Canadian stage and in the horror genre. Red carpet interviews with eOne Films, ET Canada, Canada AM and CTV Toronto further solidified Peter’s viability as an actor who is able to more than hold his own against Hollywood royalty and assisted in his casting of a more permanent recurring role on The Syfy Network’s 12 Monkeys. 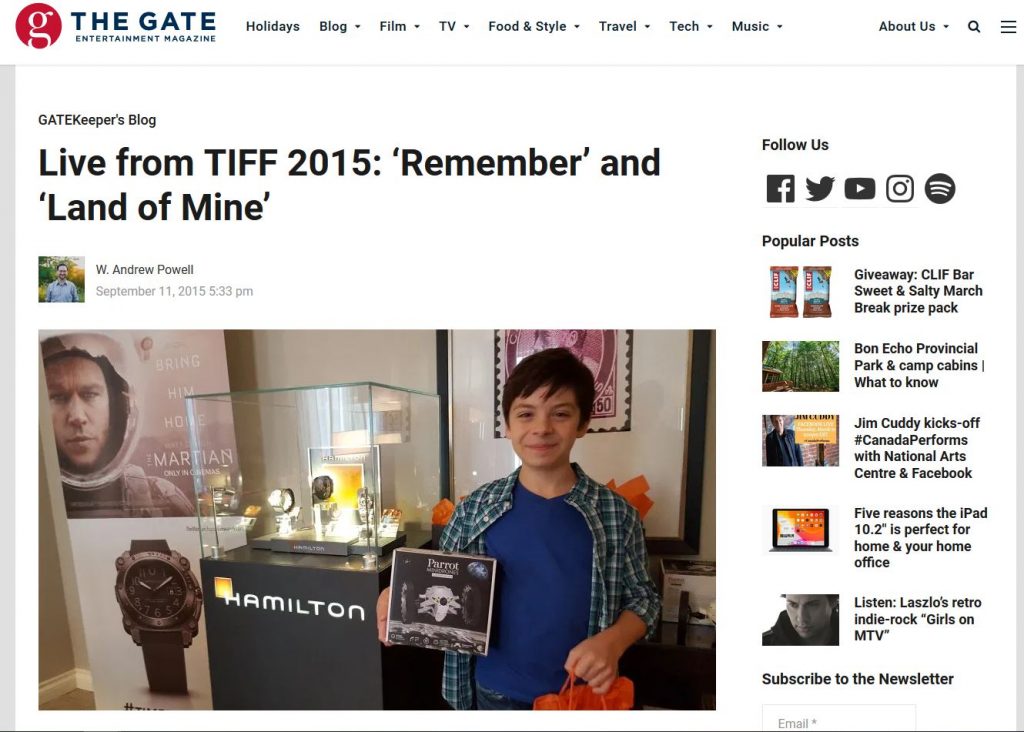 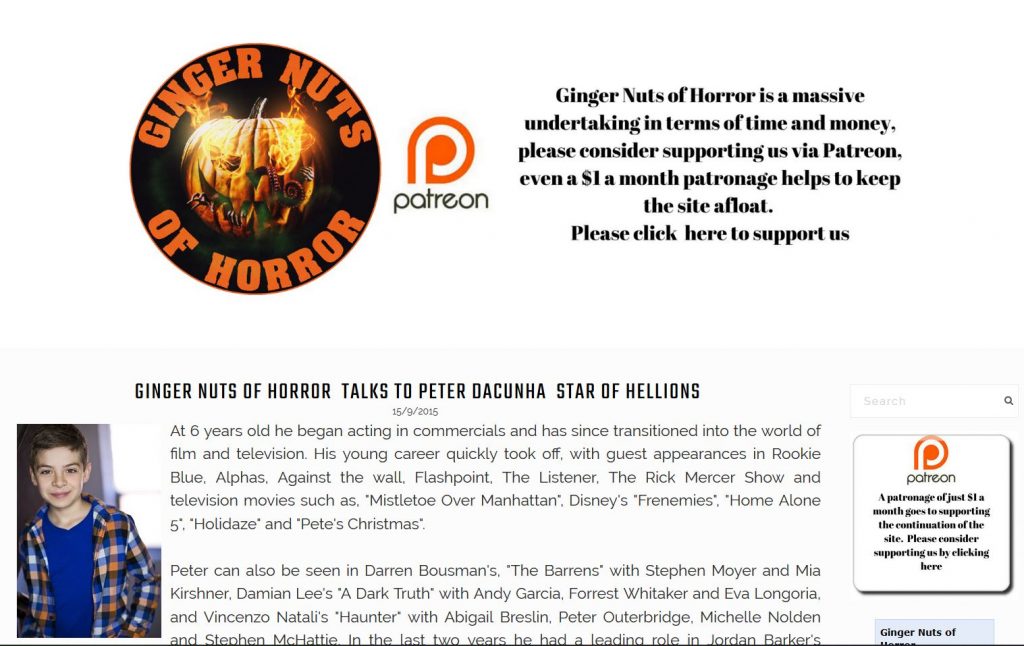 Sept 15, 2015-Interview with Ginger Nuts of Horror about Hellions http://www.gingernutsofhorror.com/5/post/2015/09/ginger-nuts-of-horror-talks-to-peter-dacunha-star-of-hellions.html