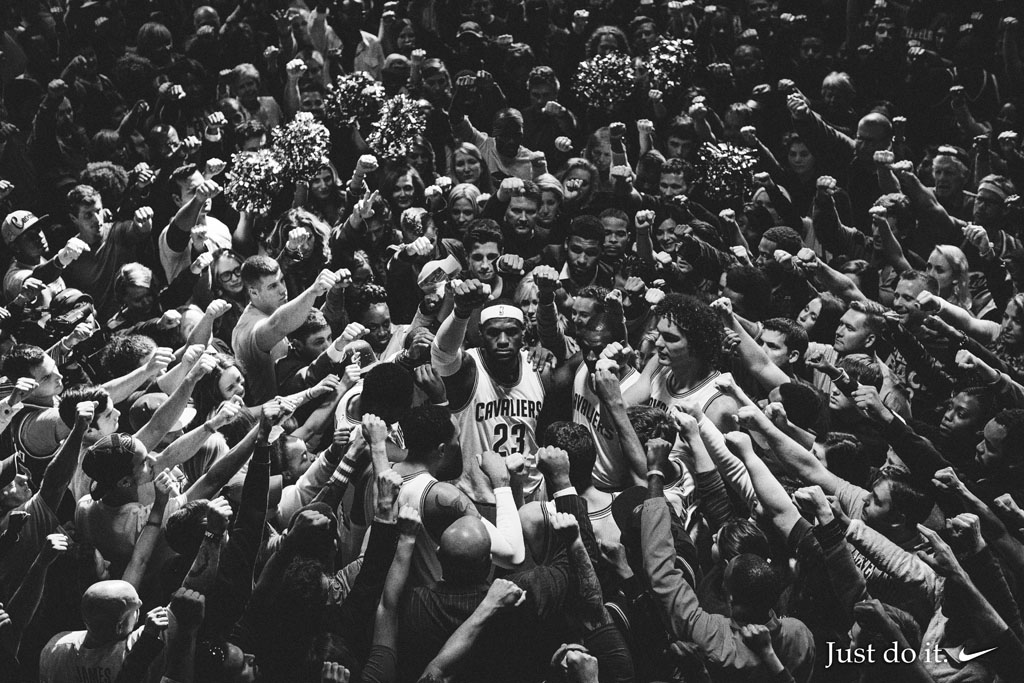 As a marketing communications professional, my first exposure to the world of advertising, public relations and social media was actually through a Nike campaign some 20 years ago. This particular campaign inspired me, pushed me to be better and forced me, even at a young age, to keep going even in the face of failure. Maybe it’s also partially responsible for my brand loyalty to Nike all these years.

Years later, the message behind this campaign continues to inspire me and it’s a message that I reach for when times are tough, when I get low and there doesn’t seem to be a way out. It inspires me so much that I even analyzed it in an academic paper.  As a professional storyteller for clients in film, food and tourism, helping them translate their stories for an array of mediums (whether it’s in PR, social media or a blog/print piece); I’ve always felt that a narrative doesn’t have to be long in order to be inspirational. Ad campaigns can go beyond selling something to actually make you feel something and messages also doesn’t have to come from a book, a film or a TV series in order be real, raw and realistic.

Without further ado, I’m going to share some of the most inspirational ad campaigns that have pushed me to be better and continue to fight through adversity and move forward in the face of failure.

Though far from the first Michael Jordan led Nike campaign I’d seen growing up, it was definitely the first of many Nike campaigns that struck a chord with me. As he’s walking into the Chicago Bulls locker room, one of the greatest basketball players of all time ruminates on all the times he’d messed up, missed a shot or the games he’s lost-and how it forces him to continue to push himself to be better. If there was one message that I continue to carry with me from this campaign, is that failure isn’t the end and that you can-and should-use it to as motivation to learn from your mistakes and move forward. Still a campaign I return 20-some odd years later whenever things are tough and I need inspiration.

Another Michael Jordan campaign that forces you to stand up and pay attention; this was the campaign formed the basis of the academic paper I mentioned earlier. With Michael providing the voiceover, the ad cycles through several significant locations and areas from his life, from his old gym and the locker room at UNC, to the trophies and accolades in the Chicago Bulls locker room. In the voiceover, the man himself talks about how peoples’ misconceptions about his career and his skill set allowed them to make excuses for themselves. At the end of the ad, he forces them to stand up and listen and to stop using him as an excuse for why they can’t play the game of basketball. The message here is simple: just because he was able to do what he was able to do doesn’t mean you can’t do the same. Stop putting him up on a pedestal that you can never reach and start working hard to get to where you want to go.

Less of a campaign and more of a personal reflection that inspired a campaign for Converse, this was the video I remember showing a co-worker (herself a basketball player who had to stop playing due to chronic injuries) 7 years ago; which reduced her into a flood of tears. Written by the amazingly talented Dwyane Wade (one of the best currently active players in the NBA today) while he was still endorsed by Converse, it’s an inspirational piece about the struggles any athlete faces in the sport they love. When you struggle with something you love, it can be disheartening, it can beat you down, wear you out and cause you to want to give up. It’s a powerful letter filled with hope that things can get better if you persevere in what you love and don’t allow the cycle of negativity to suck you under.

Are you perhaps sensing a theme in the types of campaigns I find inspirational? Even as a non-Cleveland Cavaliers fan and a casual fan of LeBron James, this campaign continues to cause me to choke up every time I see it. Why? It’s like the tagline says “This time it’s bigger than basketball,” and it was. This campaign was rallying battle cry for the city of Cleveland and it showed. This shared community, this shared love for sport brought out the loyalty, the love and the best out of the citizens of Cleveland. Say what you want about LeBron’s career, his attitude regarding some aspects of celebrity and the controversial move he made to leave Cleveland in the first place, but the man is a leader-and one who is great at rallying people around him.  And the payoff of this? Cleveland won their first-ever NBA championship two seasons later. I’d say the tears LeBron shed were well warranted.

An interesting campaign that doesn’t show its hand on what product they’re promoting until the very end, this older Smarties campaign features several Canadian singers in a duet with one another in several different locations from a church and skate park to a city bus. Each pair features a singer with another musician playing an instrument, whether it’s a beatboxer, guitarist or saxophonist. Each one sings a variation of lyrics off of Sly and the Family Stone’s “Everyday People”, substituting the colors for occupations before ending with a flourish on the line “I am everyday people.” While this wasn’t a well-known Smarties campaign around the world or even in Canada at the time, there’s something about seeing people from all different cultures and ethnic backgrounds, singing the lyrics of a song that promotes inclusiveness and acceptance of diversity, especially in the face of today’s many issues surrounding racism and prejudice.

While not a huge car fan by any means, this campaign during the Super Bowl in 2011 caught my eye because of the underlying implications. At the time, Detroit was still reeling from the 2008 recession, hit incredibly hard economically with houses foreclosing left, right and center and several auto makers had to be bailed out by the US government. Eminem, Detroit’s prodigal son, was also experiencing a major comeback in his career, having released the great album Recovery, a few months previously. What this campaign symbolizes to me is the revitalization of Detroit, the auto industry and indeed, Eminem’s career. It’s that blue-collar work ethic and the refusal to ever give up that really stands out in this campaign. The use of Eminem’s ‘Lose Yourself’ was the perfect soundtrack to illustrate what Detroit and what Eminem is made of.

Directed by the legendary David Fincher, this is by far my favorite NFL football campaign. He focuses on the life-long journeys of pro football players, LaDainian Tomlinson of the San Diego Chargers and future Hall of Famer Troy Polamalu of the Pittsburgh Steelers as they collide in an NFL season game. In the campaign, you see how both players grew up, got involved with basketball and then football and how they trained for both sports. As the two collide on the field, the message is clear: give it your all, no matter what you choose to do and leave nothing on the table. If you leave it all out there, you’ll have no regrets, no matter what the result of everything you’ve worked towards.

I thought I’d close off the list with one last Michael Jordan campaign. Unlike the other ad campaigns featured on this list, this one contains no dialogue whatsoever. Instead, this campaign shows several basketball players making slick slam dunks and gorgeous shots on courts all over the world. College kids in tournaments, high school students in the gym, even students halfway across the world in China execute great plays on the basketball court. The ad ends with a basket being sunk due to a great shot from a young Chicago native during the Chi Classic while Michael Jordan stands, proudly watching the next generation-with the words ‘Let Your Game Speak’ going across the screen. Simple, but poignant, it tells you that sometimes, words are necessary to have make an impact. Sometimes, all you need is to let your skills speak for themselves.

That’s my list of ad campaigns that inspire me and push me to do better, move forward and continue fighting. Know any more that I should watch? Let me know!

In the meantime, here’s my list of go-to songs, books & movies that help me beat writer’s block.